"The Combined Action Program originated with the Marines in 1965 when III MAF, in attempting to secure the heavily populated area around the Hue-Phu Bai airfield, discovered a 'ready-made ally' in the surrounding hamlets -- the part-time soldiers of the Popular Forces, the lowest echelon of the Vietnamese Armed Forces. Minimally trained, armed, and paid, and commanded at the district-level, they could do little towards the basic mission of providing hamlet - and village - level security. From the beginning, Marines on patrol had taken members of the Popular Forces along as guides and interpreters, but with proper support and training, it was thought they could relieve regular Marines of the local defensive mission and assist in weeding out the enemy. From this ad hoc effort in 1965, the Combined Action Program was to grow from seven platoons in January 1966, to 57 a year later, and to over 100 platoons deployed throughout I Corps in late 1968.

To work with the Popular Forces, III MAF created the combined action platoon (CAP), consisting of a 15-man Marine rifle squad composed of a squad leader, M79 grenadier, Navy corpsman, and three fire teams of four men each. Together with a Popular Force platoon of approximately 35 men, the combined unit defended one village or a group of hamlets." 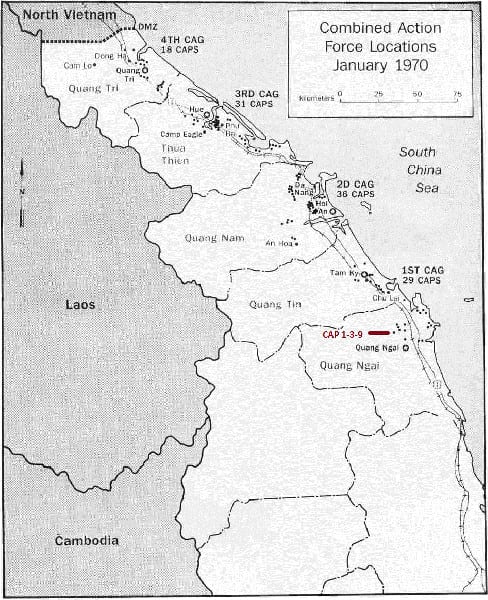 This is a map from January 1970. There were 114 CAPs at that time and that was the most that ever existed. CAP 1-3-9 has a red arrow pointing to it and was isolated from all other friendly units by at least 9 clicks (kilometers). 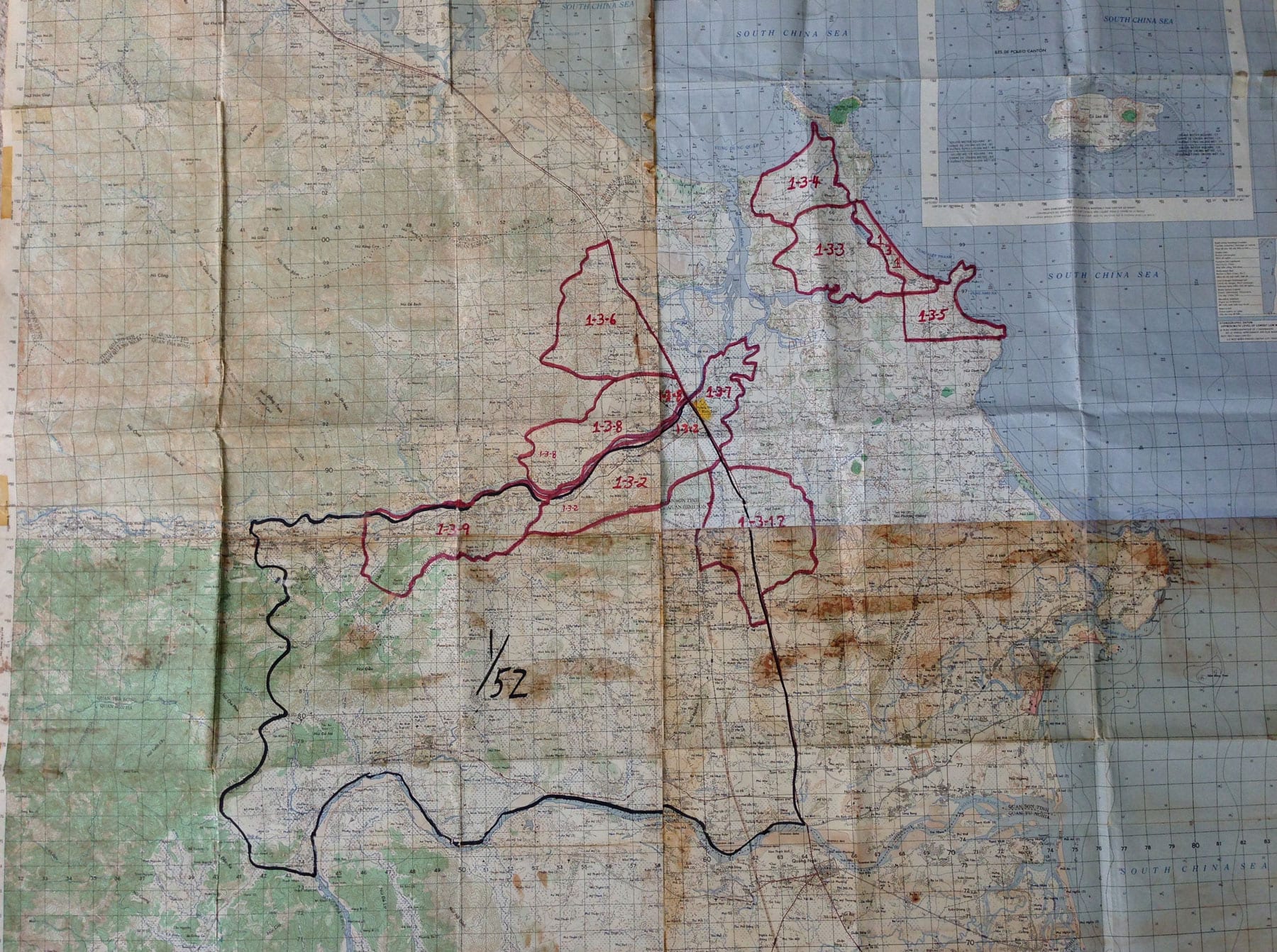 Binh Son, highlighted in yellow, is where CACO 1-3 was located. CAP 1-3-9 was midway between Binh Son and Tra Bong. It was about 14 clicks (9 miles) west of Binh Son, 14 clicks east of Tra Bong, and 1.1 clicks south of the Son Tra Bong River. “The Home of the Forgotten” was a most appropriate name for 9 because it was totally isolated from friendly forces. To make matters worse, the 6th Battalion of the 21st NVA Regiment was about 4 to 5 clicks away and was directly between CAP 1-3-9 and the closest friendlies, CAP 1-3-2. 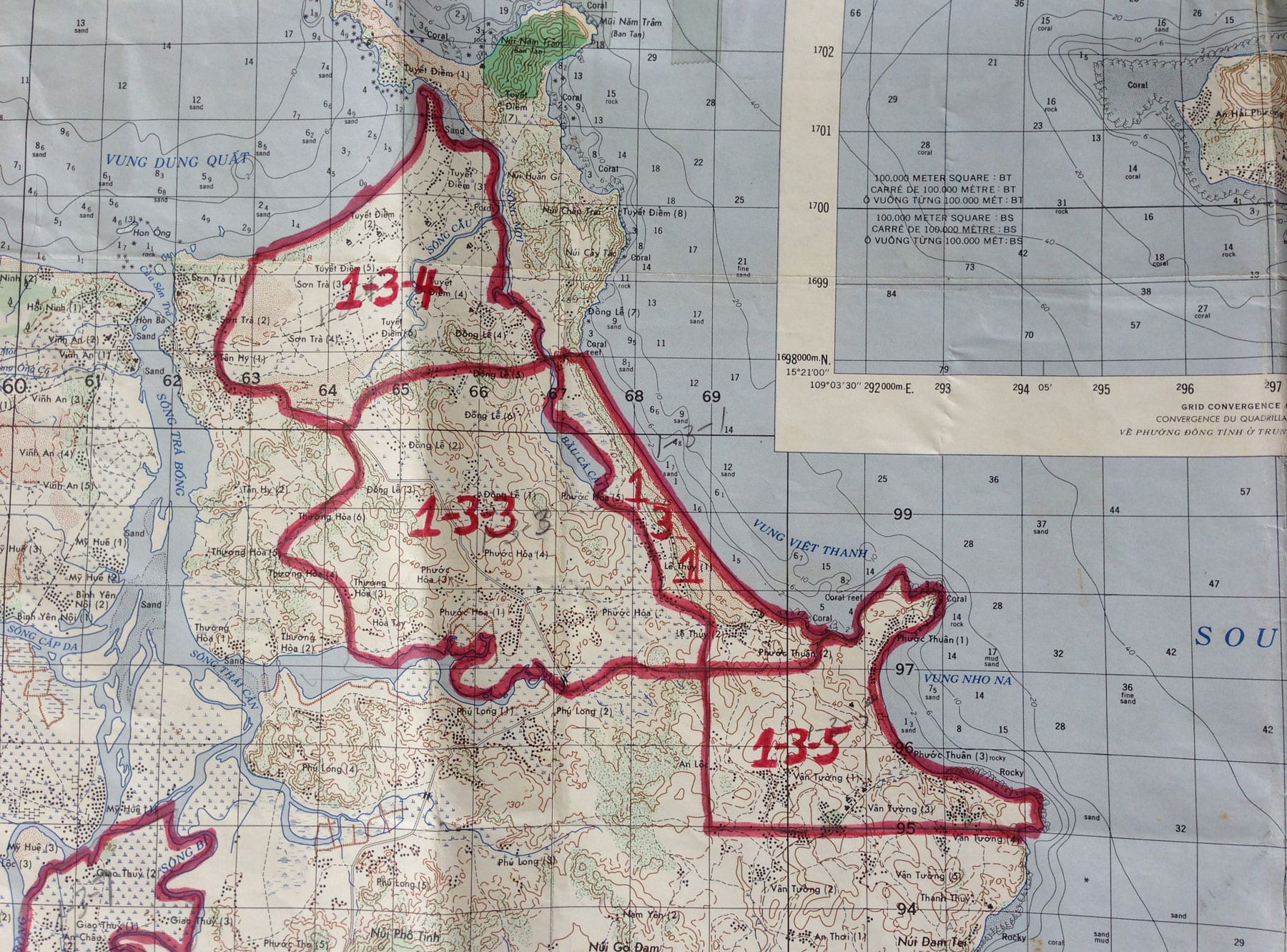 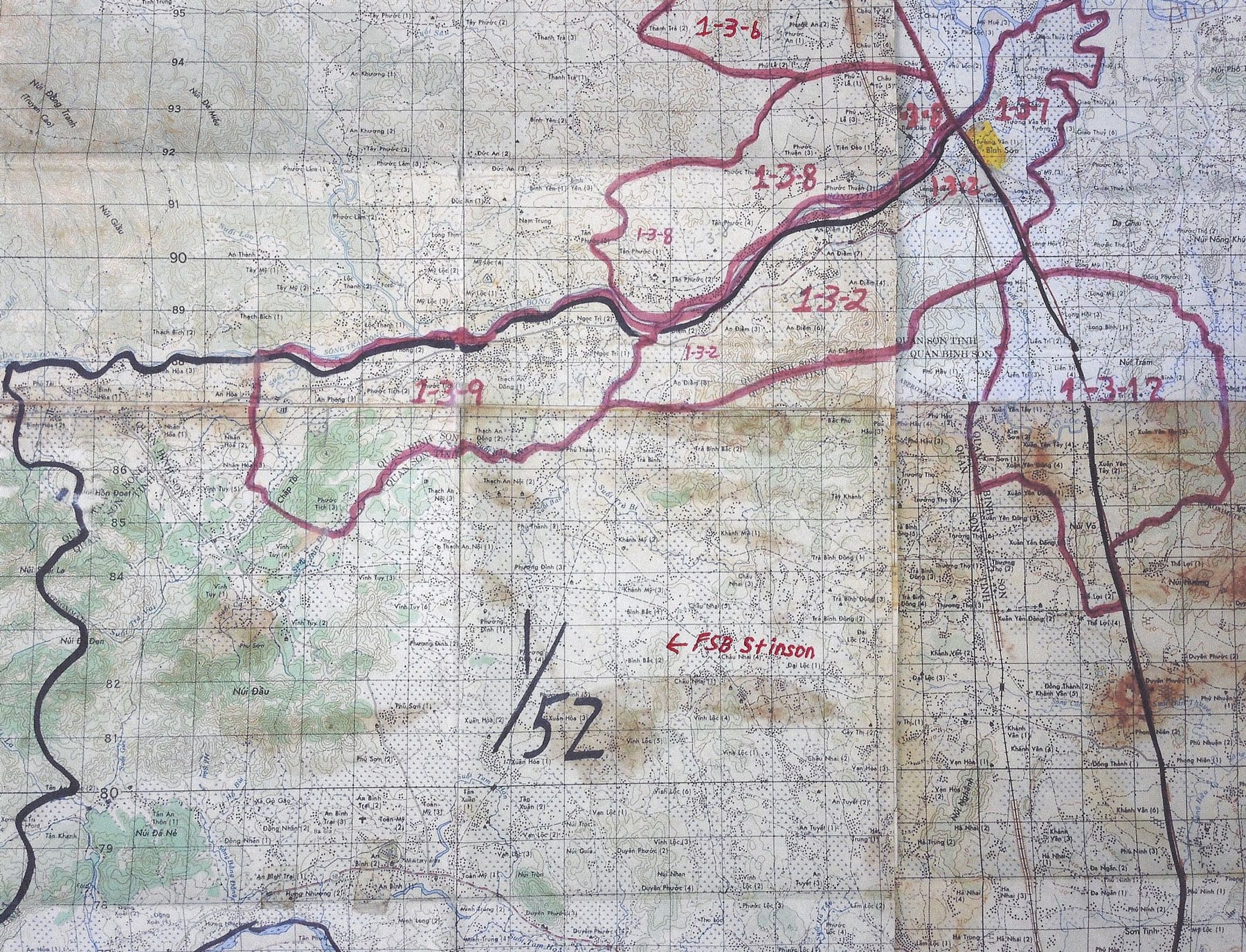 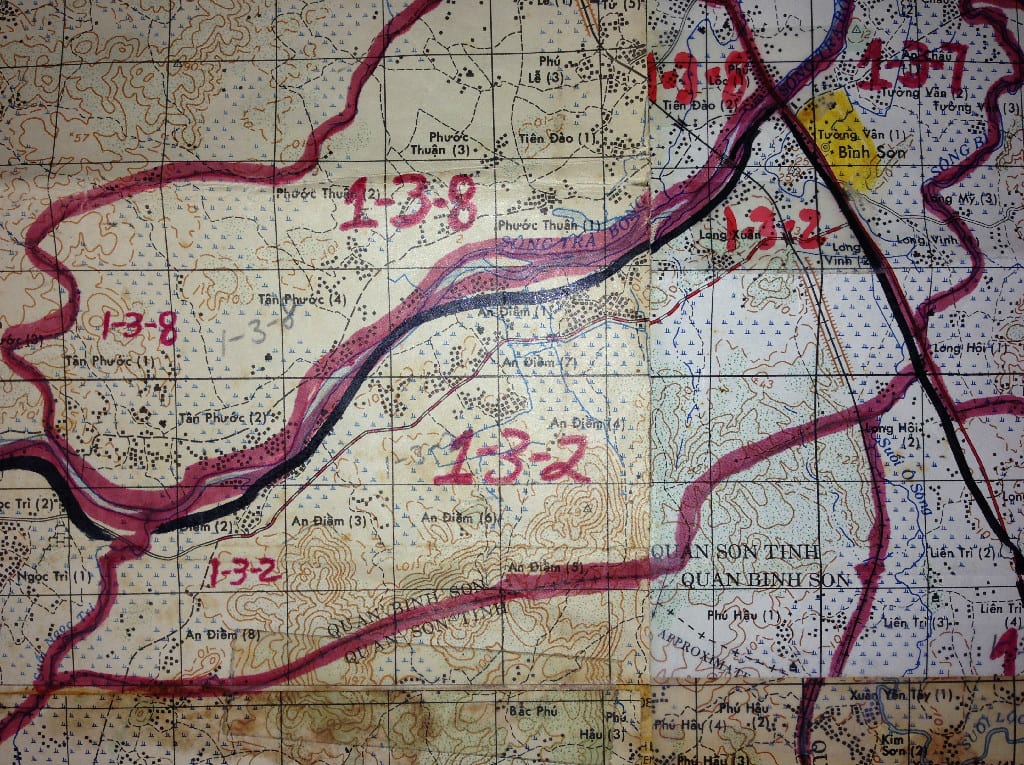 Several CAPs were in and around CACO 1-3 in the Binh Son area. Binh Son was the district. 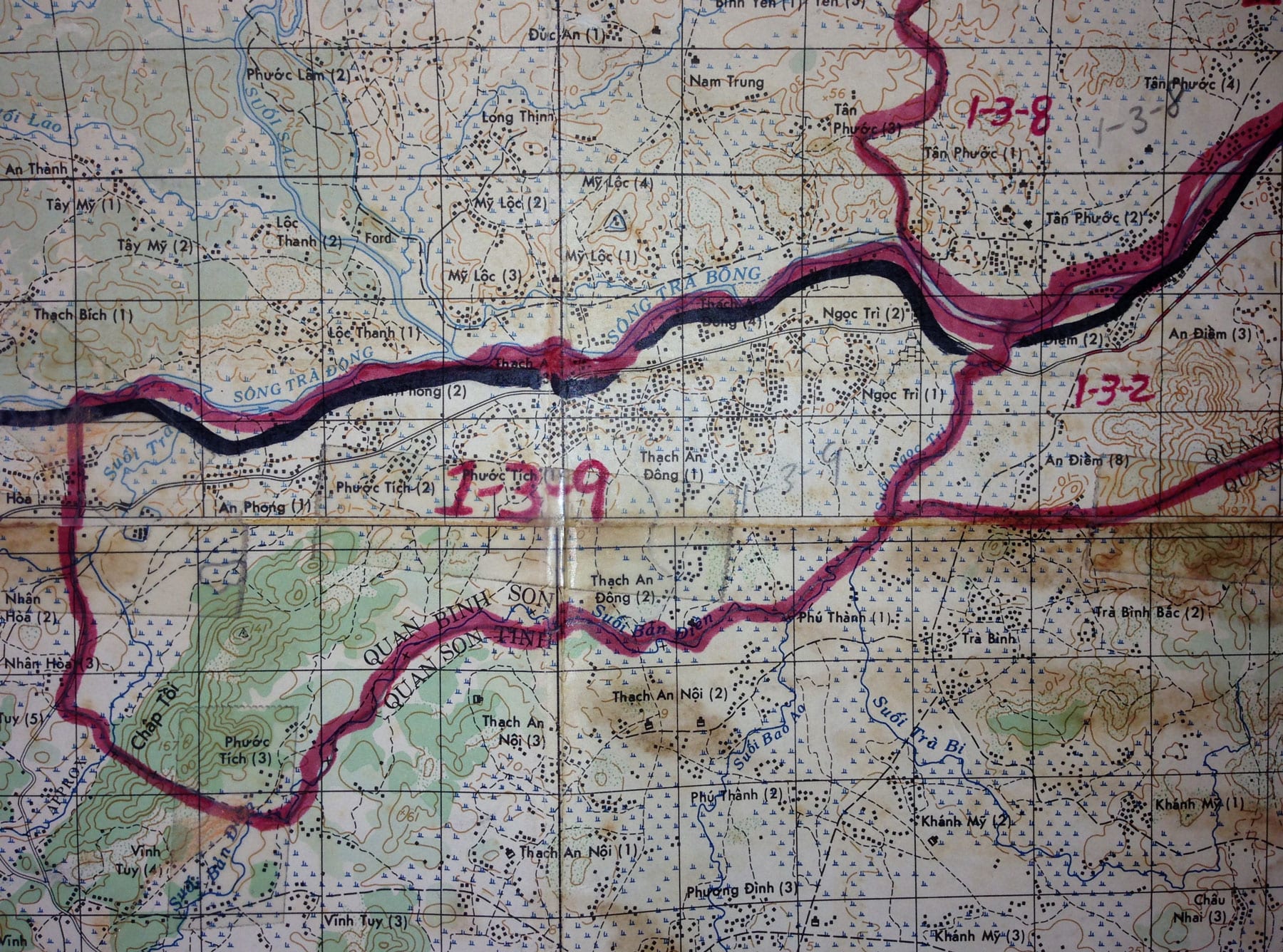 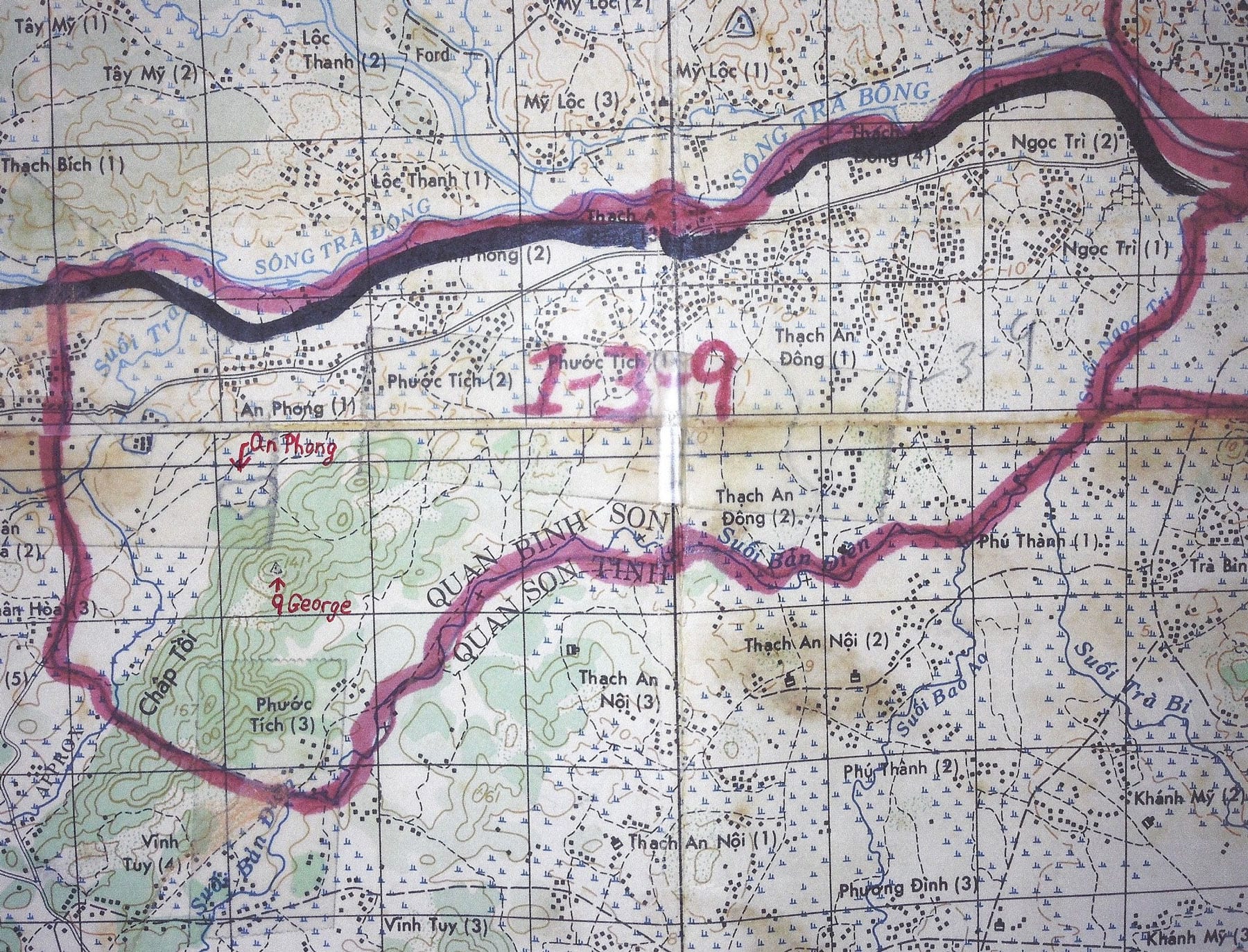 CAP 1-3-9 was in An Phong and was in the western most area of its A/O. Its radio relay was 9 George and was on Hill 141. The bottom of the hill where the trail to and from 9 George faced north and was the south side of the middle hamlet.

This is actually two Polaroid pictures that were taken in May 1970 from the trail as you entered the 9 George perimeter. The white that shows up in the village metal sheeting that was flown in a few days after the battle to help the villagers rebuild quickly. Many rebuilt with thatch roofs and many used the metal sheeting.
Legend 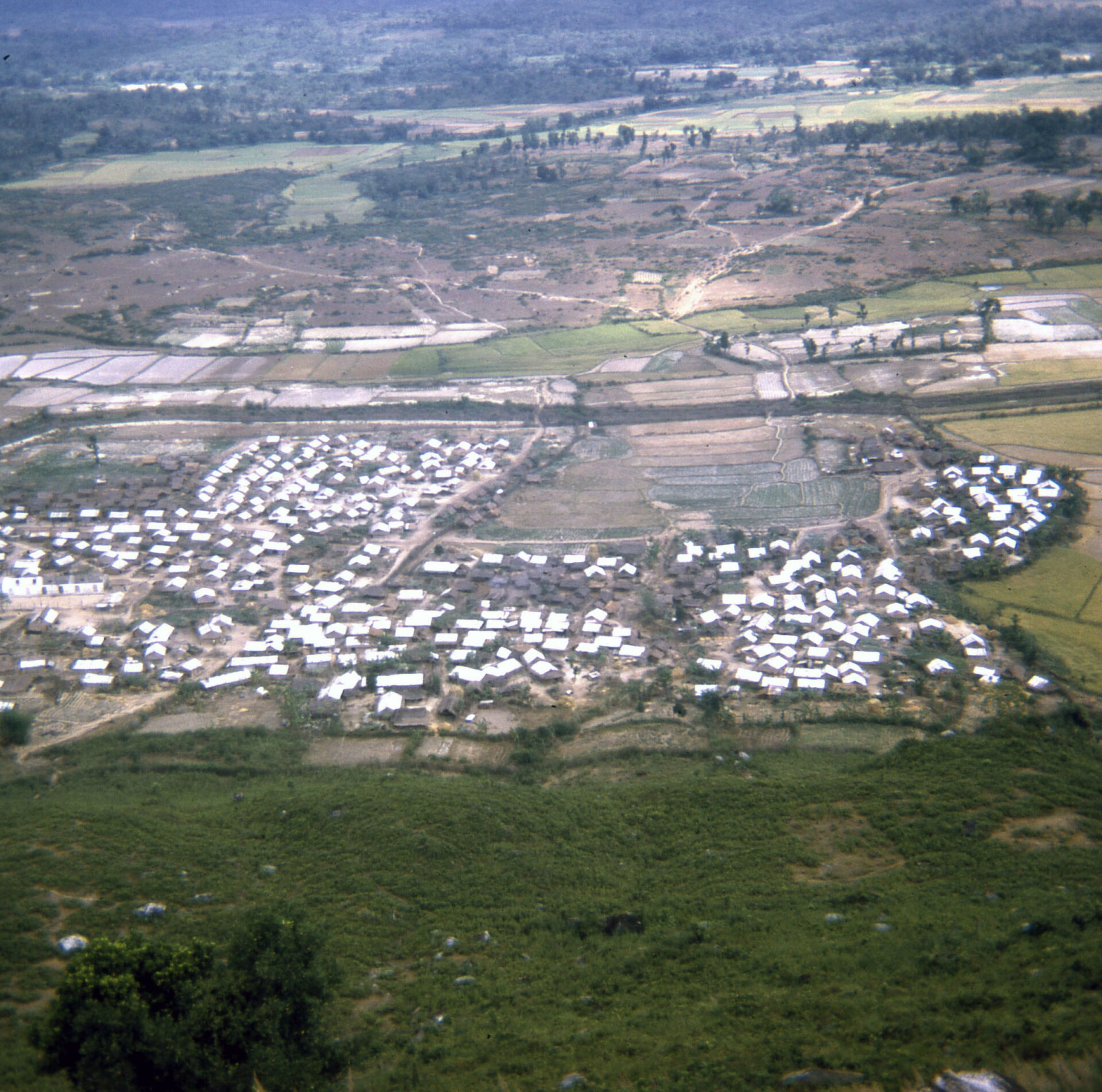 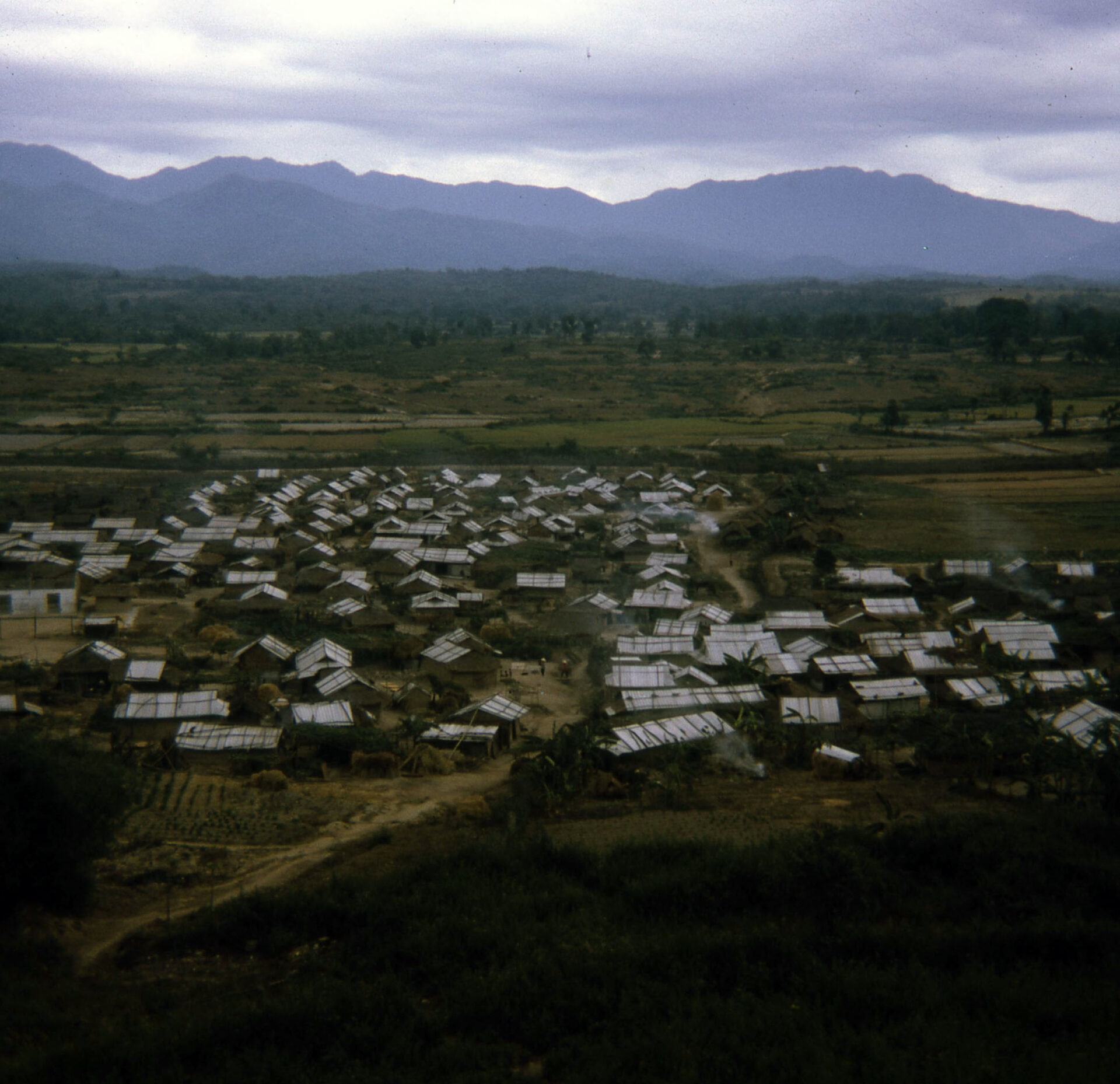 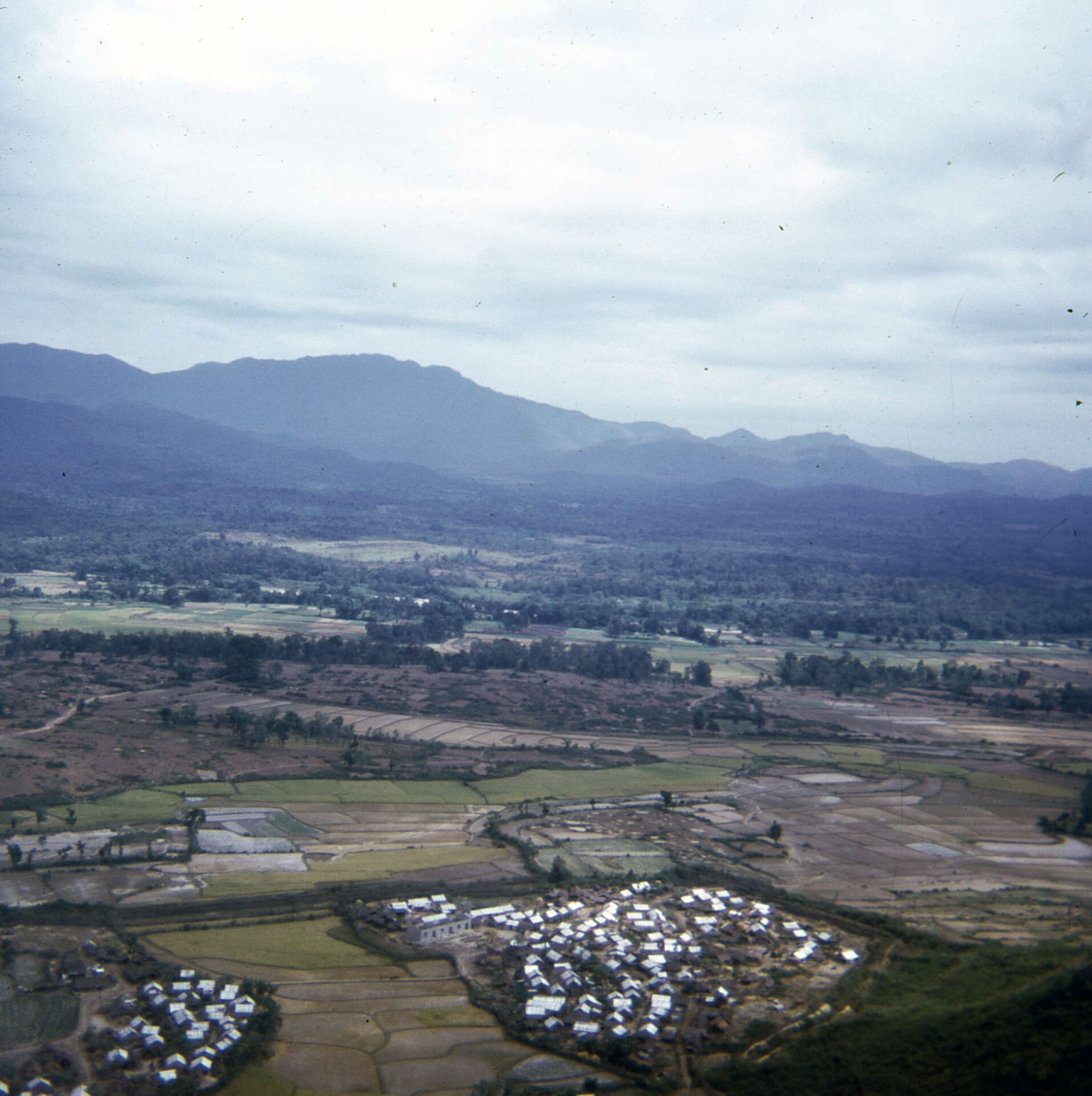 These three pictures above are courtesy of Bob Mason and were taken in early summer from various points on 9G. 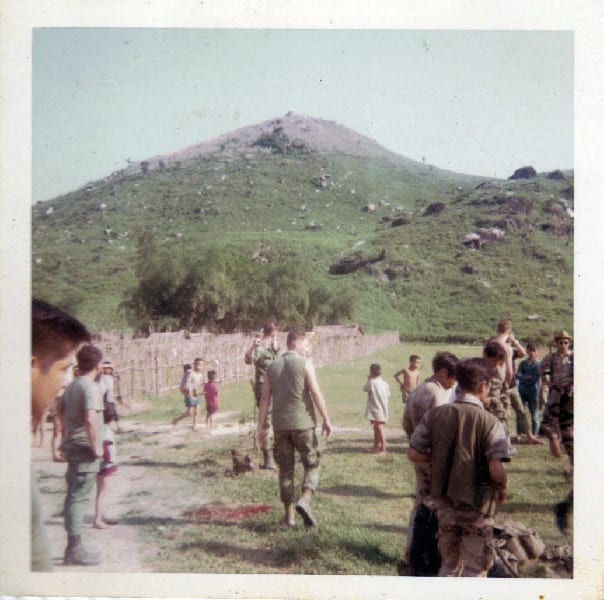 The landing zone was immediately west of the village and north of 9 George. Rows of bamboo fences served as a way to slow the enemy down more than to keep him out of the village. Paul Kaupas can be seen in the middle of the photo talking on the PRC 25 radio to the resupply helicopter. The Marine in the sleeveless shirt in the center of the photo is Cpl Phil Leiker. Other Marines include L/Cpl “Chief” Anoatubby (face in picture on the left) and Cpl. Garcia (green t-shirt with hands on his hips). The Marine on the right with no shirt on is unidentified. 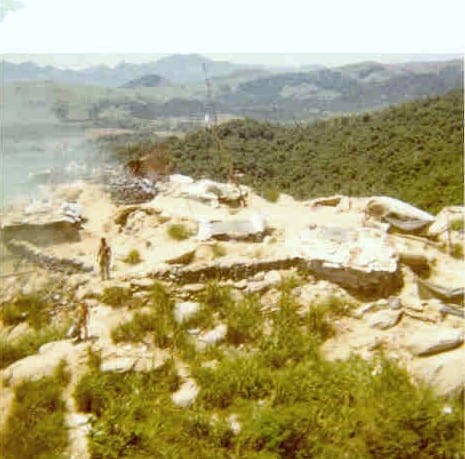 This photo was taken in June or July 1970 from the resupply helicopter as it approached 9 George after leaving 9. Middleton and McKnight are the two Marines in the left area of the picture. The 9 George LZ wasn’t an LZ at all but instead was the small area in front of the Marine at the bottom of the photo. 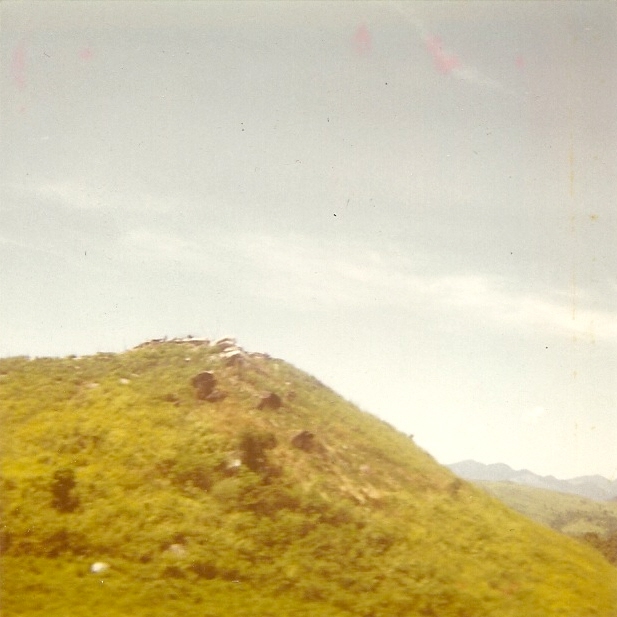 Taken from the resupply helicopter in June 1970. 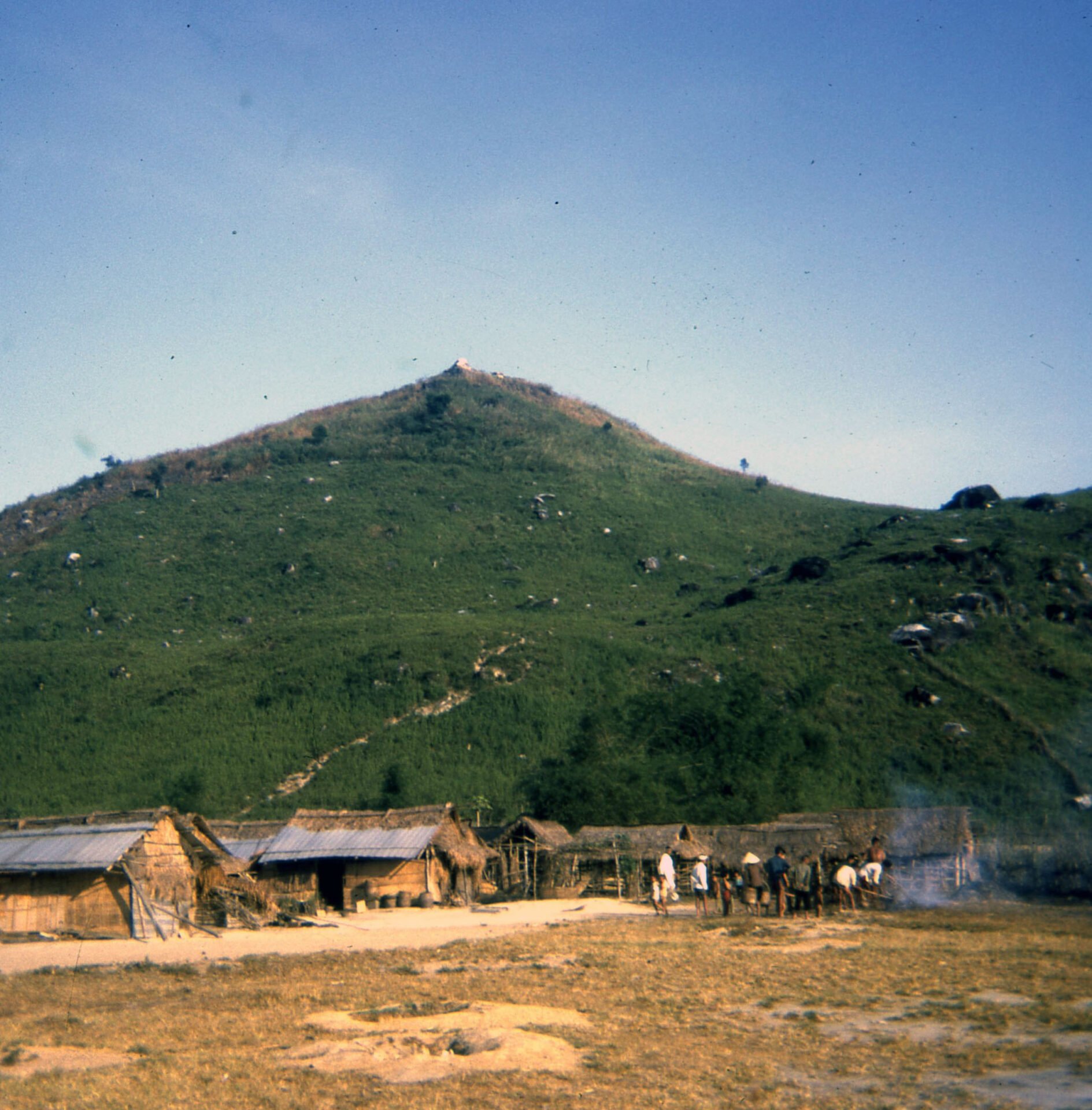 9G as seen from the west hamlet. 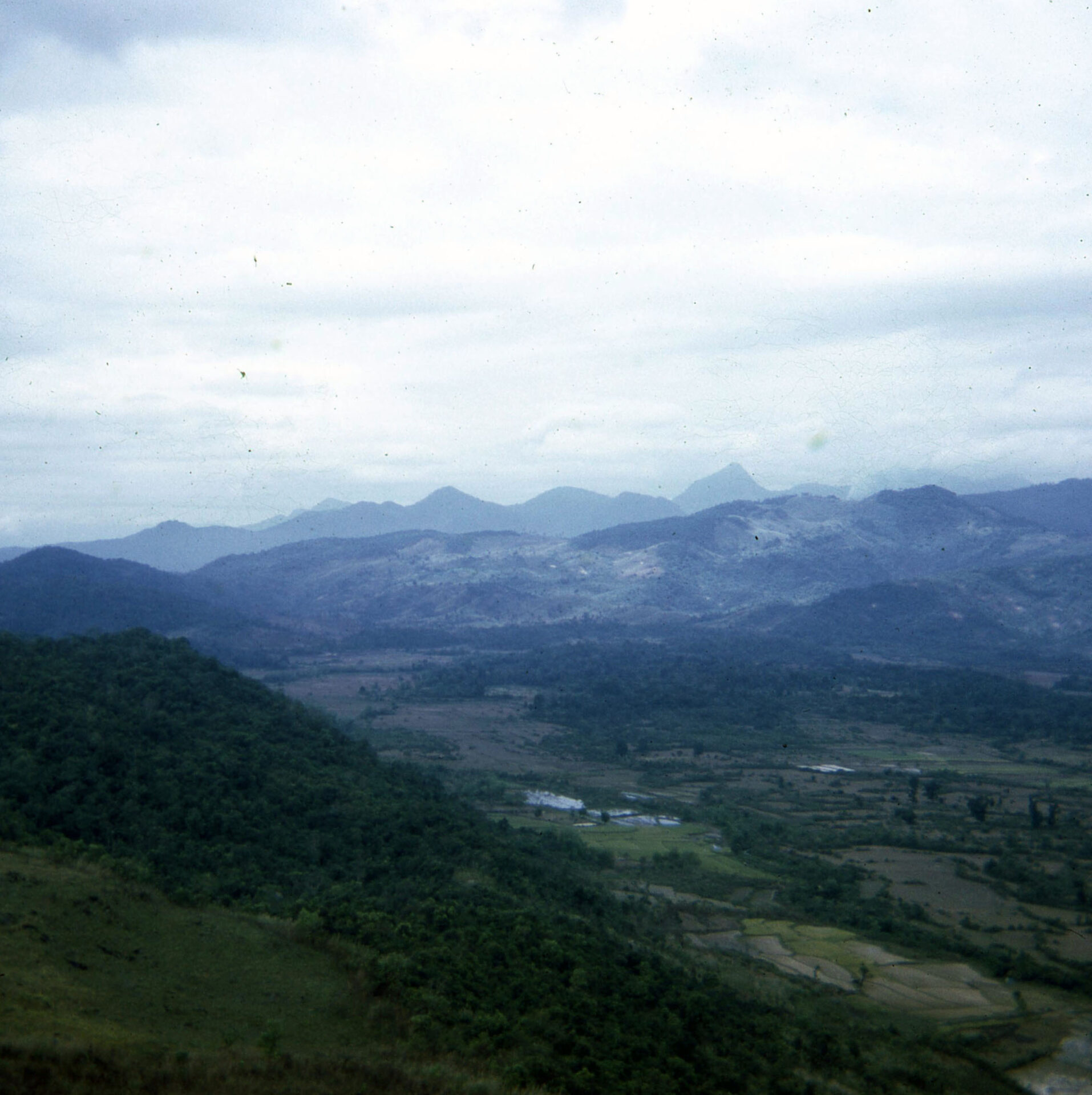 The west side of 9G as seen from the Marine CP on 9G.