The first CAP commander of CAP 1-3-9 was Sgt. Robert Holm. He stated in an email, "We first landed at An Phong on December 16, 1968. I also had started the first Mobile CAP which was 1-3-2. It was what we called a double CAP, in that there was twice the normal amount of Marines as well as PFs. When the decision came to start 1-3-9, I was given some new Marines and was allowed to pick some of the Marines from 1-3-2. We were then choppered in to start 1-3-9. An Phong was already a Strategic Hamlet and was manned by, I believe some RF's and PF's. For the most part they stayed at OP George. The closest friendlies was a Special Forces Camp."

A strategic hamlet was the term used to describe a hamlet or village (two or more hamlets using the village name followed by a number designating which hamlet it was) in which the Viet Cong infrastructure had been eliminated. An Phong generally consisted of Vietnamese who were loyal to the South Vietnamese government. It was thought of as a refuge village.

Those who were supportive of the communist and were in the An Phong area at the time it because a strategic hamlet left the area and generally moved to the Tach An Dongs, about 4 to 5 clicks to the east.

The maps of CACO 1-3 CAPs were maps LeBlanc used while in country and predated An Phong becoming a strategic hamlet. The maps of An Phong show numerous hamlets throughout 1-3-9’s A/O, but they weren’t actually there. The village of An Phong consisted of three hamlets and was at the foot of the north base of 9 George. It isn’t printed on the maps.

CAP 1-3-9 generally had what could be called moderate activity in the months prior to the attack on September 13, 1969. There were isolated encounters with the enemy. Most of the encounters involved probing activities

One such activity involved a mine exploding outside one of the middle gates as a villager was taking his cow out in the morning. This was in late May or early June 1969.

Corporal Phil Leiker, the CAP commander up until the time of his departure, around August 8, 1969, indicated that they had VC activity at the fence at least once per week. He mentioned that, "One night in late July the VC launched dud 155 arty shells back at us, they set up about 50 years (yards) from the north of the Vile. Lucky that the fuses were too short and the shells exploded 100 ft in the air because the fuses were too short.. No damage to the vile, they were over the school house area."

Leiker also indicated that they ran day patrols down to the river and around the exterior of the village fences and two night patrols which were kept close to the village. Many booby traps were found near the village gates in the morning. The villagers were good at letting the CAP know the booby traps were there, which allowed the CAP to blow them in place.

Offensive operations into the VC controlled area to the east were run. This area, as Leiker pointed out, was a training area for the VC.
The villagers started bringing their cattle into the village at night a couple of months before the attack.
August intelligence revealed that the enemy continued to use the Son Tra Bong River as a primary infiltration route into Quang Ngai Province.

The CAP, also in August, called in an artillery mission on a VC platoon at coordinates 473863.

These situations indicated that something was probably going to happen, but who would have thought that it would involve a reinforced battalion of NVA attacking the CAP? 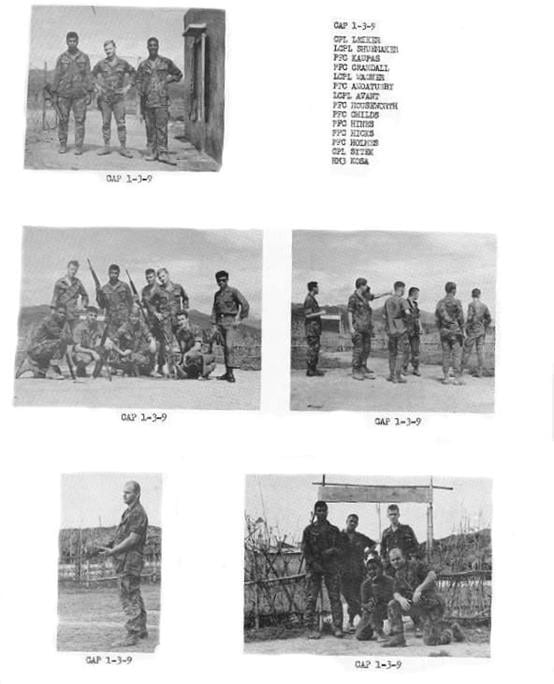 Top left photo: L/Cpl Mel “Dr. Soul” Avant, Cpl. Leiker, and PFC Reggie “Capt. Soul” Childs with Childs standing next to the school house.   Cpl Leiker was the CAP commander.
Middle left photo: Childs is kneeling on the left, PFC Crandal is kneeling on the right.  Paul Kaupas is the Marine standing on the left and Leiker and But are standing on the right with Nguyen But ( a PF and our interpreter) on the end.  Others are not known.
Middle right photo: Taken at the west gate with the Marine in the rear pointing to the north.  Others are not known.
Bottom left photo: PFC Bill “Buddha” Hines
Bottom right photo: Childs and Hines are kneeling with Childs on the left, Avant, PFC Gary “Beaver” Holmes and another Marine are standing with Avant on the left.  They are in front of the west gate. 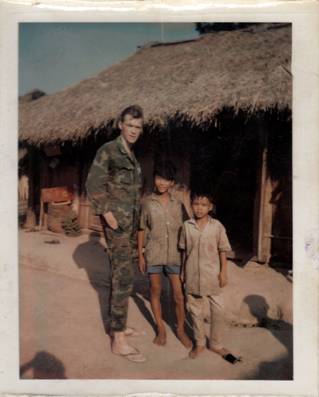 Paul Kaupas and two babysons in front of the hooch the tallest boy lived in. Kaupas lived there too. Duong is on the right. Paul Kaupas is shown here with a Vietnamese girl who lived in the hooch to the right. This is at the base of the trail that was used to go up 9 George. 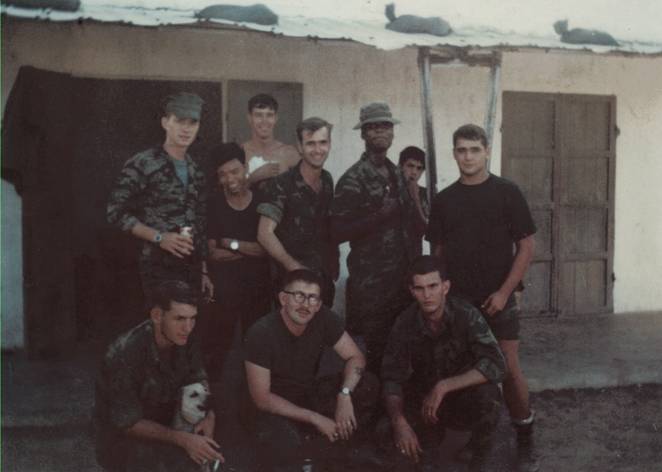 Left to right; Reggie Childs, Gary Holmes, L/Cpl. Rick Sherrill, PFC Steve Hicks, John Wagner, Paul Kaupas with But in the front. Again, the school house is the background.  Sherrill was KIA in the attack and Wagner just passed away December 22, 2012. 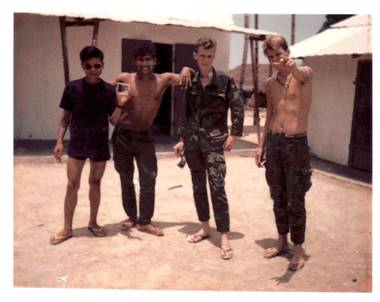 But, Hernandez, Paul Kaupas, and Michael Shuemaker near the school house.  Hernandez was wounded twice by hand grenades within a two hour period prior to the battle of September 13, 2013.  Shuemaker was wounded on July 4, 1969 and died the next day. 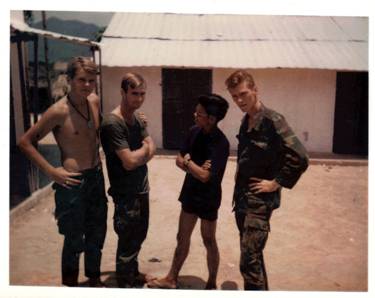 Michael Shuemaker, John Wagner, But, and Paul Kaupas near the school house. 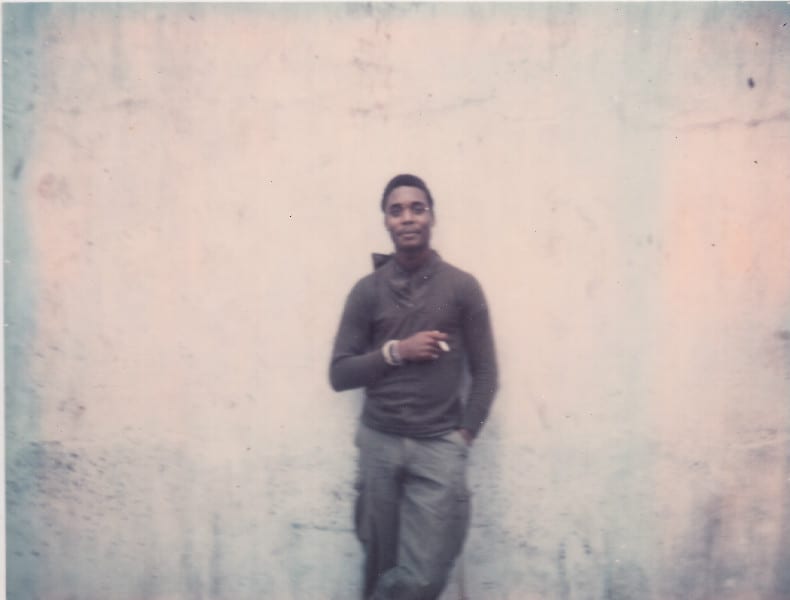 Reggie Childs standing next to the school house. 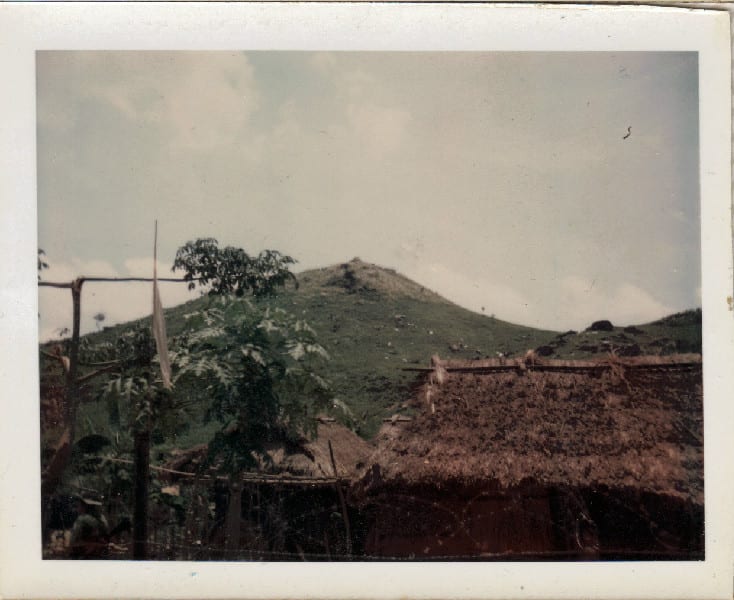 9 George as seen from the west hamlet